Are you tired of fighting with your hose bib? Is it leaking? Are you able to turn it off? Enter our giveaway to get up to 4 new ones installed on your existing plumbing. This is open to Tampa Bay residents only and for up to 4 existing hose bibs.
Posted by Paragon Plumbing Contractors at 2:05 PM No comments:

Who Are These Guys? 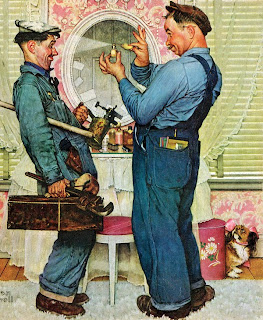 We take you job seriously. We do your job right and mind our own business. We clean up our mess, and always double and triple check for leaks before we leave. We wouldn't want that white rug to get dirty.
Posted by Paragon Plumbing Contractors at 10:22 PM No comments: 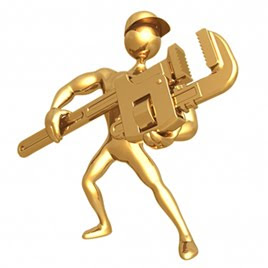 Troubleshoot Your Toilet Without a Plumber

Overflowing, constantly running and sweating toilets can test a home owner's sanity. Sometimes you'll have to go with a pro, but here are seven common problems you can fix yourself. Excerpted from the Popular Mechanics book When Duct Tape Just Isn't Enough, published by Hearst Books/Sterling Publishing. Check out previous excerpts here.

You’re spending a lot more time in the bathroom than you’d like because your toilet never seems to completely flush on the first try.


THE QUICK FIX
A poorly flushing standard toilet can be caused by a number of different problems. Lift the tank cover, and first check the chain that runs from the flapper cap to the flush handle; if it is too long, the handle won’t lift the flapper cap sufficiently. Shorten the chain length by hooking into another link of the chain. Next, look at the water level in the tank—the amount of water affects how strong the flush will be. If the tank is not filling all the way (there should be a fill line on the inside of the tank), carefully bend the bulb of the float valve up a bit and see if the tank will fill. If it does not, check the toilet bowl rim holes (through which the water enters the bowl) with a small mirror, and if they are blocked, clean them with a small nail and acid-based porcelain cleaner. If none of the above does the trick, you may have a misadjusted or faulty fill valve that needs replacement

How a Water Softener Works

How It Works: Water Softener

It makes hard water easy to get along with.

BY THOMAS KLENCK
Published in the August 1998 issue.

It's easy to forget how important water is in our lives. Of course we need it in our diet, but in our homes, it's a tool--a fluid medium that carries material from one place to the next. And one of the reasons it does this job well is that it's very good at holding things, either by suspending them or dissolving them.

Unlike most tools, though, water doesn't come with an instruction manual. If it did, you'd know why the dishes you thought were washed are covered with spots when dry, why the water in your shower leaves a film on everything it touches, and why what you thought was clean water has clogged up your plumbing system.

The Solution Is The Problem

While water is in the ground, it picks up soluble bits of whatever it passes through. While this can mean contamination that makes the water unfit to drink, in many cases it simply means that the water contains minerals found in the earth. Of these, calcium and magnesium are of particular importance because they affect the water's ability to function in our homes. These minerals make our water hard.

One effect of hard water is that soaps and detergents lose some effectiveness. Instead of dissolving completely, soap combines with the minerals to form a coagulated soap curd. Because less soap is dissolved, more is required. And the sticky insoluble curd hangs around--it clings to the skin and may actually inhibit cleansing. Washed hair seems dull and lifeless.

In the laundry, things aren't much better. The soap curd can work its way into your clothes as they're being washed in your automatic washing . This can keep dirt trapped in the fibers, and it can stiffen and roughen the fabric.

In addition to affecting the actual washing process, insoluble soap deposits leave spots on everything you wash--from your dishes to the family car--and a soap film will build up in your bath and shower.

Another reason to be concerned about hard water is its effect on your plumbing system. Calcium and magnesium deposits can build up in pipes, reducing flow to taps and appliances. In water , these minerals generate a scale buildup that reduces the efficiency and life of the heater.

The solution to the problem is to get rid of the calcium and magnesium. While there are chemical treatments that do this, the most popular answer is a water .

The typical water softener is a mechanical appliance that's plumbed into your home's water supply system. All water use the same operating principle: They trade the minerals for something else, in most cases sodium. The process is called ion exchange.

The heart of a water softener is a mineral tank. It's filled with small polystyrene beads, also known as resin or zeolite. The beads carry a negative charge.

Most popular water softeners have an automatic regenerating system. The most basic type has an electric timer that flushes and recharges the system on a regular schedule. During recharging, soft water is not available.

A second type of control uses a computer that watches how much water is used. When enough water has passed through the mineral tank to have depleted the beads of sodium, the computer triggers regeneration. These softeners often have reserve resin capacity, so that some soft water will be available during recharging.

A third type of control uses a mechanical water meter to measure water usage and initiate recharging. The advantage of this system is that no electrical components are required and the mineral tank is only recharged when necessary. When it is equipped with two mineral tanks, softened water is always available, even when the unit is recharging.

Companies that sell water softening equipment generally offer test kits that help you determine the hardness of your water. For commercial testing sources, check your Yellow Pages under "water analysis."

Water hardness is measured in grains per gallon (GPG) or milligrams per liter (mg/l, equivalent to parts per million, or ppm). Water up to 1 GPG (or 17.1 mg/l) is considered soft, and water from 60 to 120 GPG is considered moderately hard. A water softener's effectiveness depends on how hard the incoming water is. Water over 100 GPG may not be completely softened.

Hard water poses no health hazard. On the other hand, the sodium that remains in softened water may be a problem for those on sodium-restricted diets. Other people simply may wish to avoid the slightly salty taste of treated water. In either case you can install a separate water dispenser that bypasses the softener. You also can use potassium chloride instead of salt, although this costs about three to four times more.

In ion exchange, hard water ions replace sodium ions on beads. Process is reversed to flush minerals away.
Posted by Paragon Plumbing Contractors at 11:42 AM 2 comments:

The Model of Excellence

Welcome to our blog.

We are working hard to be creative in getting the word out about our services.

We may be a new company but we are not new to the industry.

We care about our customers; we take care to do the job right.

We have an old fashion work ethic; do good work to be proud of.

We service the Pasco, Hernando, Citrus, Pinellas, and Hillsborough counties.

Paragon Plumbing Contractors
New Port Richey, Florida, United States
Licensed & Insured We will work hard for you and get the results you want.